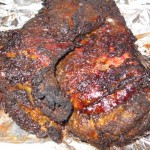 I got up later than planned on Saturday, around 8am. Which set me back on time to do the brisket bbq. I needed to stop by Home Depot to pick up a temperature gauge for our trusty old Weber kettle…and it was a purchase that paid off.

Initially, we were out of smaller options of untrimmed whole brisket at the supermarket, so the honey brought home a 14lb slab of beef. He seasoned it the previous night; I sliced it apart the next morning and reseasoned it. At 10:30am I put the point end (about 7 to 9lbs of fatty brisket) over some hot hickory coals and began barbecuing.

It wasn’t really until after 11am that I achieved desired temperature. The coals had burned too high (from 450F down to 350F) at the start and since I was frustrated with the process of going out in the midday heat every 10 minutes to check on the temps, I finally killed one of the banks. That got me below the 300F degree mark sometime after 12 noon and we were finally on our way.

The intent was to keep ambient temps in the grill between 200F to 250F. We worked out a system to refill with coals about every hour for about 10.5 hours. We watched movies all afternoon to keep us occupied while we waited on the brisket to finish, snacking on grilled sausages and potato salad in the mean time. Internal temps stayed around 160F in the later part of the day until I decided to add a small amount coals to the second bank to generate some heat and help speed up the bark-making process. At 9:30pm at 175F-180F we pulled the brisket off the grill and let it sit for another half hour. The honey grilled up some super sweet corn; then we sat down to eat.

It was truly the most sublime piece of meat that I had ever barbecued. Silky soft slabs of glistening beef fell apart as I sliced it. The slow cooking process achieved what we wanted; a rendering process that broke down the channels of fat in the meat to moisten and tenderize it. The honey declared it the best brisket we ever bbq’d–better even than Rudy’s.

And that’s how 2011 July 2 became the date of brisket accomplished.