I haven’t written up a recipe in awhile. But rest assured, I stayed busy in the kitchen all year.

This recipe pairs crab and corn together for liquid gold creamy goodness. During warmer months, I usually omit the potatoes, but recently DH demanded potatoes in his chowder, so in they went.

I thought it time to mix up my fave summer treat, mango and sticky rice, with a colorful twist. Golden kiwi and black/purple glutinous rice in sweet coconut milk. This is a gluten-free and “mostly” dairy-free dessert that I appreciate for its hot-and-cold temps in the same dish.

“Mostly” because the stevia I use at home is Trader Joe’s 100% Pure Stevia Extract powder that lists lactose in its ingredient info (the organic version does not contain lactose). If you’re paranoid about artificial sweeteners (or want to avoid the aftertaste), stick to regular sweeteners that contain sucrose, glucose or fructose. Authentic Thai sticky rice calls for palm sugar or coconut sugar.

This recipe requires a little prep time before getting to the end product. The rice needs to soak in water for about 4-6 hours, overnight if possible before steaming or cooking on the stove top.

I’m a fan of cooking shows, especially the globe trotting kind. While he’s no Andrew Zimmern (whose Bizarre Food series I absolutely enjoy), I recently digested Ainsley Harriott’s street food series “Eat the Streets” on Netflix and was excited to try out some ideas I gleaned from the show.

One of them is a strangely familiar dish, bearing passing resemblance to Filipino adobo chicken…in which chicken parts are braised in a soy sauce base.

Three Cup Chicken/Pork is an easy poultry dish made herby with garlic, ginger and basil. As the meat braises in a spicy-salty-sweet sauce, the basil really gives this dish the perfect finish.

I found pre-cut drumsticks at my local 99 Ranch grocery, but you can chop your own or substitute chicken thighs. I’ve also cooked this with pork belly–which is especially divine.

Take 10lbs of lamb shoulder (we sourced ours from Central Market), rub generously with salt, pepper and garlic powder overnight, then smoke over oak and hardwood just like a beef brisket.

Mind you that this lamb shoulder does have a few rib bones in it, so a little more studious monitoring is required so it doesn’t overcook. Our Thermoworks Thermapen MK4 and Dot make this an easy task.

Most BBQ lamb recipes I’ve seen treats lamb like a steak, to be grilled or seared over high heat to a rare temperature. In this instance we are cooking low-and-slow for juicy, fatty, shred-ready pulled lamb.

We wrapped the lamb shoulder at the 165F mark and smoked till internal meat temps reached 195F-200F in our BGEXL, again as we would a beef brisket. I should mention that we also had a pork shoulder (boston butt/picnic) also sharing grill space with the lamb that we sauced and wrapped at the sta

Why did I make this? Coz it goes SOOOO well with lamb.

We smoked a 10-pound lamb shoulder we sourced from Central Market about a week ago and I knew that this was the perfect condiment for it. I’ve been eating lamb and chimichurri for more than a week now and I can’t get enough of either!

Inspired by <a hr 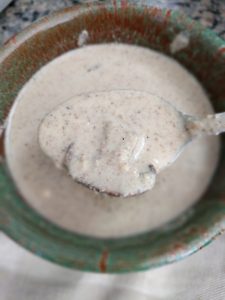 I love mushrooms. I love their earthy taste especially when roasted. I love that they are capable of absorbing and releasing flavors depending on the dish. Deep-fried, stir-fried, braised, stuffed, stewed, grilled, or even raw, I’ll add a fungus to my dish any time the opportunity presents itself.

I have several mushroom soup recipes in my collection in an attempt to squeeze out as much shroom flavor from the edible fungi. One of my fave

I don’t know what it is…but every few months or so I go back to cooking pasta in the slow cooker.

It never EVER ends well.

Most pastas just don’t take very well to long and slow cooking. And the type of slow cookersco use don’t have timers.

I get excited when I find the perfect recipe for bechamel or cream sauce, whip up a batch, dump it along with uncooked pasta in the cooker, then set it and forget it.

The result is usually some cheesy sodden mush that would likely impress children, but not their parents. Which is a damn shame given the time and dollars I wasted sourcing the best ingredients…only to have it end in an ugly overcooked pile.

So this is a note to self: stop making pasta in the slow cooker.

And before I embark on that slow cooker lasagna recipe…do more research!

Oh yeah…this is (almost) it. The perfect chocolate chip cookie is within my grasp…if only I can make it sugar-free, but there’s something marvelous in the chemistry of brown sugar + white sugar that results in the texture and taste of an awesome chocolate chip cookie. Sugar-free sweeteners just can’t compare, not to mention they can’t nail down the molecular magic that comes from using real sugar.

After poring over tests, photos and baking instructions in the Ultimate Chocolate Chip Cookie Guide and tweaking King Arthur’s gluten free recipe, I’ve come up with this list of ingredients and baking guidelines that is repeat baking-worthy, even if it doesn’t provide instant gratification (u

For the second fried onion experiment, I dabbled in a little potato starch, a potato starch/baking soda mix, and used coconut oil as a frying medium.

Also Texas sweet yellow onions and a batch of pre-cooked chicken gizzards would be objects to be dredged, egg-washed and fried up for testing.

Results: potato starch = bad for solo coating. It was clear that as soon as the potato-coated onion ring hit the oil that it wasn’t going to develop the crisp exterior that I aimed for. The potato simply began to flake away, almost like pastry bits, and never formed the crunchy shell I hoped for.

The potato starch/baking soda mix also had no effect on the final fried onion, neither puffy or crisp as I had predicted. Because of this, I relegated the potato starch as the first dredge in a 3-step process, with tapioca starch becoming the final dredge prior to the hot oil drop.

It’s no secret that we’re in love with smoking on the Big Green Egg. And with our handy ThermoWorks gear, (i.e. DOT and Thermapen Mk4 both in screamin’ Green) smoking and grilling to temperature has gotten a whole lot more accurate.

So when I spotted a post on ThermoWorks blog about competition style BBQ ribs, I just had to put our BGE to work reproducing those delicious BBQ pork ribs.

We sourced our pork ribs from two vendors: our local Kroger grocery store (for back loin ribs) and a butcher shop, Matador Meats, in Plano (for St Louis cut ribs).

I applied our cajun-style dry spice rub to the ribs and refrigerated until we were ready for meat to hit the grill.

Here’s a reprint of my Cajun/Blackening Spice recipe: