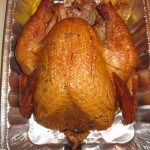 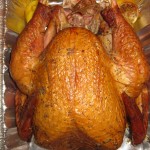 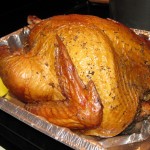 My 2011 Thanksgiving turkey turned out to be a winner. I thought I wanted a fried turkey this year, but ended up throwing this bird onto the Weber grill to smoke for nearly 3 hours. Initially, I started with one bank of coals; but when I saw that temperatures weren’t rising after the first hour, I fired up a second bank in the second hour and that’s when things started cooking. I also included a pan of water in the grill to catch the drippings and keep the turkey moist.

This is a 14.5 pound Jennie-O turkey brined for 20-21 hours. It came off my trusty Weber 22″ grill smoky and succulent; perfect moisture, texture and color. I didn’t have to cover it to achieve that beautiful golden brown–it arrived at that color without drying out. It came off the grill when I determined temps to be in the 150-160 range, estimating that it would rise another 10 degrees when removed from the grill. After cutting into it, we marveled at the tenderness and juiciness of the bird from white meat to dark. It even boasted a smoke ring on the bottom half.

The taste was complex. Under the smokiness we detected all the garlic, pepper, salt, rosemary, and sugar from the brine. What also cut across all those complex flavors were the lemon wedges I stuck into the cavity; the meat nearest the cavity had a light smoky taste accentuated by lemon. Just wonderful.

I love garlic and rosemary; I chopped enough of both to result in about 1-2 handfuls of each. Meanwhile, I add salt and sugar into a huge stainless steel stockpot (large enough to brine the turkey in). Turn the heat on high, then add 2 gallons of water. I boiled the brine until salt and sugar were dissolved before adding rosemary, garlic, garlic powder and black pepper.  Stir then cover the stockpot, and turned off the heat. Throw in the lemons and let the mixture sit overnight, at least 6-8 hours, to let it steep. Remove the lemons before dunking the turkey into the brine the following morning.

Clear out some space for the stockpot brine and refrigerate for 20-21 hours. This brine may result in a salty turkey for some, so I suggest trying 16-18 hours brine time, or reduce salt measurement to 1 cup.