I’ve been having a blast lately making soups with my homemade bone broth, mostly derivations of Vietnamese pho, minus the banh (or rice noodles). It made for a more mindful and healthier start to 2017.

Bone broth is so easy to make, it makes me wonder why I ever bothered buying cartons of the store-bought stuff (e.g., convenience). But studies have revealed the healthy benefits of collagen, gelatin and all the minerals and electrolytes that go into bone broth (hello, gut health, reduced inflammation, alleviating joint issues, hydration for post-workout and the list goes on) that it’s an easy decision to skip the commercial boxed or bouillon types.

So for my very first bone broth (back in April 2016) I needed only 3 ingredients: about 3 pounds of center-cut grass-fed beef marrow bones (found at Whole Foods Market), 2 tablespoons of apple cider vinegar, and enough water to fill a 5 quart slow cooker.

Dump all ingredients in the pot and cook low and slow (BBQ types know this phrase well enough) for 12-24 hours.

Now because these bones were sourced from Whole Foods, they were relatively picked clean and “not so scummy/bloody” while they rendered out during the slow cooking process. Some food blogs suggest parboiling before simmering the rest of the cook time. But, in future posts, I tried different cuts of meat and bone with the result of a less transparent broth. Nevertheless, in all endeavors, it was worth getting a mini fine-mesh strainer with rubberized silicone handle to stream the liquid through as I prepped the broth for storage. Obviously, I didn’t want to refrigerate anything suspended in the broth that risked altering the flavor in the long term. 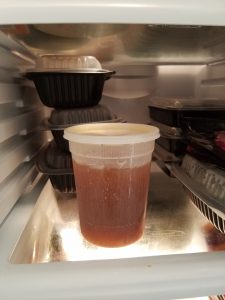 Yep, there’ll be a small amount of fat in this collagen-rich broth. It’s part of what gives this broth that mouth-coating feel when sipped straight out of the cooker. Some folks can’t tolerate it which is why I suggest storing the broth in the refrigerator overnight, then removing the fat that gels on top of the broth the next day. SAVE THAT FAT, though! Store it in the refrigerator and use it in sautes and stir fries later! 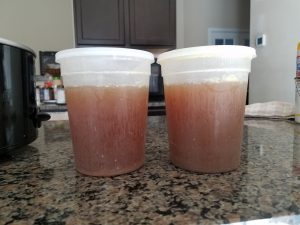 If you’re curious, this is an unseasoned broth so it will taste bland right out of the slow cooker. I intended to use it as a base for other dishes like stews and sautes.

Thanks to Nom Nom Paleo, Wellness Mama and The Kitchn that shared instructions and plentiful tips on how to make and store bone broth.