Four days before Christmas (Saturday): crock pot whole wheat lasagna with beef and sage pork sausage. It cooked perhaps a little too long with not enough sauce. Luckily, we had jars of sauce to make additional batches to ladle on. Remember to add some sugar, spice and cinnamon for an added kick!

Sunday: Smoked turkey brined in salt/rosemary/garlic pepper water for 48 hours. 1 cup of salt to enough water to cover a 12-13 lb turkey produced a nicely flavored and moist turkey. However, the smoking process toughened the skin; I unfortunately omitted the oil/butter rub on the surface and under the skin. This year, I also stuffed the cavity with garlic instead of lemon, which consequently went into a batch of mashed potatoes! Yum!

Monday: Another crock pot day. This time we tried a point cut brisket with potatoes and carrots. Unfortunately, there was hardly any flavor to the meat; despite that we tried adding a homemade brown gravy at zero hour. The big mistake was filling up the crock pot with too much veggies and not enough sauce, which took 8-10 hours to cook. While I liked the tender texture of the fatty cut brisket, too much of the fat had dissolved into what sauce there was, making it for a less-than-delectable meal. We’ll try chuck next time and add flour to a beef broth next time (skipping the veggie broth). The man insists we should use beef bouillon, but I lean toward the broth instead.

Tuesday: Standing rib roast with cauliflower and brussel sprouts. As usual, I made a fantastic 2-rib roast coated in olive oil, garlic and rosemary. Since it was a small size (about 3-4 lbs), it cooked rather quickly for a little over an hour. The instructions on this page made for a fool-proof delicious roast. However, the drippings was too overwhelming for 1 pound of fresh brussel sprouts; so I opted to add a pound of frozen cauliflower to the mix. I think the extra water made the veggies too wet for my liking. Next time, 2 pounds of sprouts or bust! Fresh cauliflower would probably yield better results too!

Desserts: We opted for fried banana…however, we tried to find that perfect Brazilian recipe and failed. My experience with fried bananas are in one of two categories: banana-que and batter-fried bananas. We opted to go the banana-que route and melted butter and sugar in a pan. Sliced bananas then coated them in the melted sugar mixture; then rolled them in an additional coat of brown sugar and cinnamon. A true banana fritas recipe would include flour to create a thin crust, but we were looking for bananas fried like Texas de Brazil. 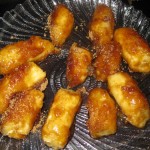 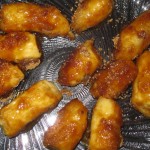 Snacketizers: Crabbed stuffed mushrooms with ricotta, mozzarella and parmesan blend were roasted in the convection oven to doneness. While it wasn’t bubbling hot melted cheese, I though this dry version was still yummy and not messy. We also tried several batches of cheese bread recipes that turned out mostly fail. My first batch produced a semi-wet dough that was cheesy, garlicky (coz I used fresh garlic) with heavy cream that had a thick crust and somewhat chewy inside. Second time around, I omitted the cream but somehow added too much water that came out extremely runny and resulted in cheese cookies. So it made sense to invest in a mini-muffin tin to prevent collapse of the dough. At this point, I ran out of tapioca flour and ran to the store to buy more; only to find that American stores don’t really carry tapioca flour in its pure form. I went with a gluten-free flour mix which had tapioca, rice and potato flours. Of course, this resulted in a very DENSE bread that was nothing like the moist fluffy cheese bread that I was addicted to. Back to square one: I had the man fetch some real tapioca flour at the Asian store. One cup later, I was closer to nailing the recipe. The crust was still too hard, but the interior was approaching puffy moistness of the classic Brazilian cheese bread. To further tweak the recipe, I plan on taking down the temperature to 325 and baking 20 minutes, instead of the high heat (450) and short bake times (10 mins). 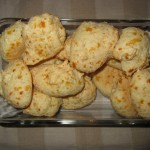 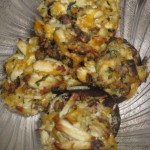 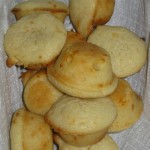